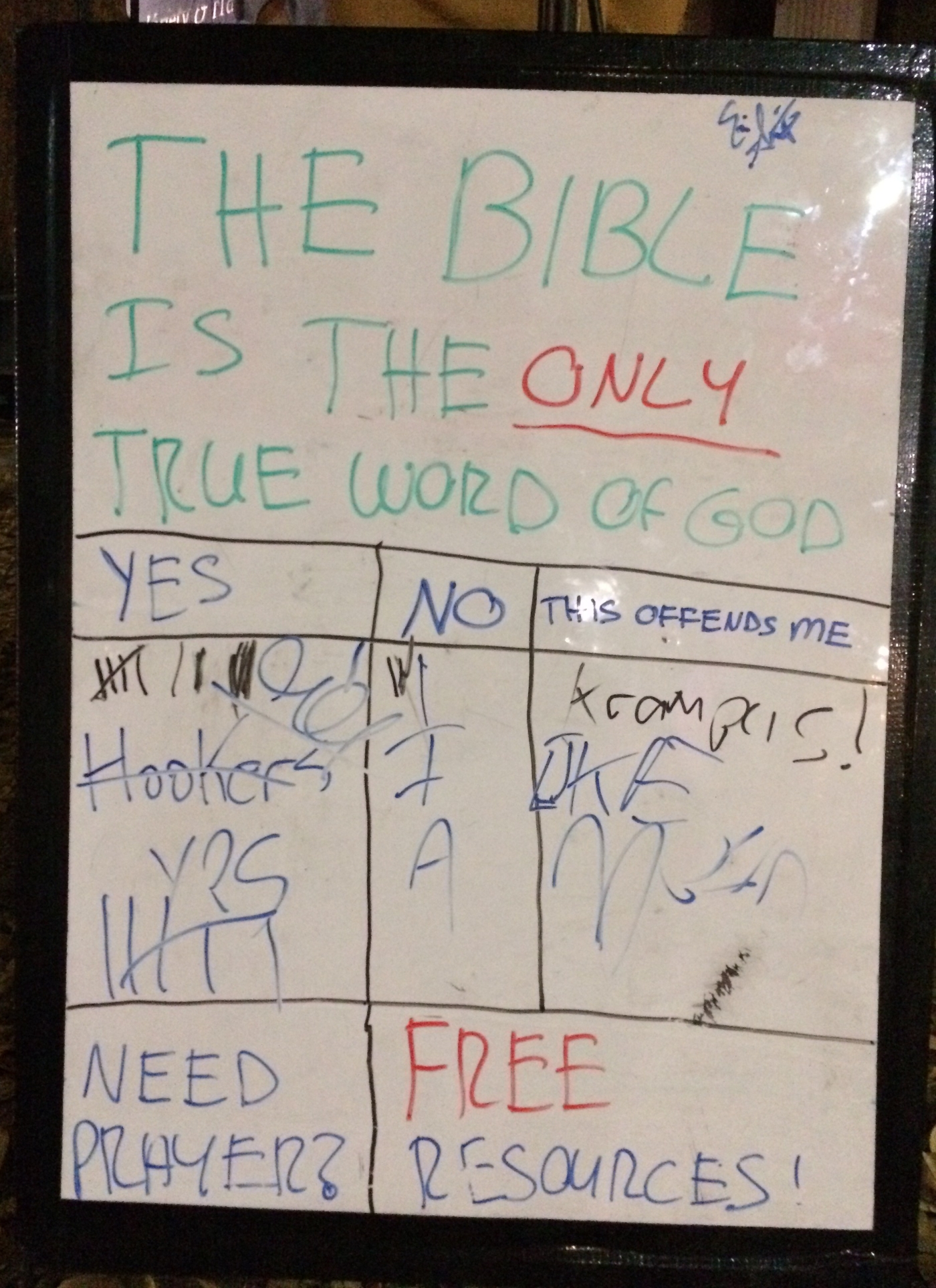 Yes it’s true: I’d rather offend someone into heaven than “love” them into hell—love being in quote marks, because not sharing the truth with someone due to fear of man is not very loving. The term “tough love” when it comes to the gospel is actually quite gracious. Now there’s a balance of course. My friends and I don’t seek to say stupid things to purposely offend people/draw a crowd like the Pelagians do—that’s offending for the sake of pride. When you tenderly offend, but offend, for the sake of the truth and love, that’s where God’s truth and love lie.

So Clemson is a little town in South Carolina with a big university, that pretty much runs the town from what we gather. The Lord used me getting laid off from my job a few months ago to prompt me to want to do some evangelism in Clemson with the extra free time I had. I asked my friend Bobby to show me the ropes of campus evangelism, and he graciously drove down to Clemson from Athens with a crew.

Maybe an hour after we arrived three police officers showed up with university officials—good stuff for my notes but not for the First Amendment, lol. I quickly learned that the police didn’t mind us as much as the public relations peeps. One of the officers even thanked us for being there. The conversation with school officials, which we had at future times we were on campus to share the gospel, was that there are only a few designated spots we can go to, and we must fill out a whole book of paperwork 72 hours beforehand to get their approval. Total infringement on free speech at a public, tax-payer supported school, but hey, you gotta give and take in this pc-mad political climate.

After a few times of that experience we heard that Thursday night is party night in town for Clemson students. So we thought we would check it out, and now we don’t ever want to check out, because this is where the gospel fruit is. The first night we went out, it’s a late night because things don’t really get hopping until 10.30-11, an officer told us we’d have to shut down the amp but could preach with the voice, and continue to chat to people and hand out tracts. My husband Steve tried preaching unmiced, but the speaker outside the pizza shop blaring music was so loud he got drowned out. It didn’t matter, because we got in so many conversations that we didn’t have time to worry about not preaching.

Students there are hungry for the truth and open for a chat. Even if at the outset, they may be offended. However I think most of that is because when they first see us they think we’re just going to yell stupid things at them and tell them they’re going to hell, while pretending to be sinless perfectionists ourselves. That is so far from the truth, but unfortunately a true stereotype. Thankfully the ones that stick around to listen and have a convo quickly realize that is not what we do. Granted we are not afraid to call sin for what it is and talk about the just consequence of hell, but we are not afraid to talk about God’s abundant love, mercy and grace for the lost, for those he draws to himself, in light of the bad news. So we get in really good conversations and are often told we’re the first Christians they have been able to have a civil, intelligent conversation with.

On the first night we also met a campus ministry group, who were probably a little bit skeptical of us as well. We assured them we were not the Pelagian who had recently smeared his unbiblical gospel around the campus. However I did have a great discussion with some of them about reformed theology and what constitutes being a good person. I ended up giving one student a small book that goes through the basics of Calvinism/reformed theology in comparison to Arminianism.

Hopefully we’re also encouraging them to be more bold in their witness, and you guessed it, not be afraid to speak the truth, even if it offends, which most often it does. We’re enemies of God as unbelievers and we hate him, so the truth ain’t gonna sit too well with us. That’s exactly why we need to be offended, because we need to hear what we don’t naturally want to hear.

The second time we went out on a Thursday night relates to the pictures. We usually try to have a question on the whiteboard that will stimulate conversation. Btw, this is one of the most effective tools I’ve used to spark conversation. Even if people don’t want to engage, they are eager to mark their answer on the board, and I can at least give them a gospel tract. As you can see from the picture, because I got tangled up in a drunk crew of blokes, they wanted to write gibberish all over the board. That’s ok, they took tracts and hopefully read them the next morning. I even met an Aussie (Australian) guy, who didn’t want to meet his Kiwi neighbor preaching on the mic—his loss.

In reference to the other picture of the people, on the left Steve (in black) is sharing with plaid-shirt guy. I think that was right before Steve got mobbed with 10 drunk guys pressing in on him and speaking nonsense. Yet we’re used to this from our New Zealand street days, so he just carried on the conversation with who he was talking to unphased. Plaid-shirt guy (on the outside) was a bit belligerent and argumentative, but as you can see, he stuck around for quite a while talking to Steve.

On the right is my friend Charles (the giant ogre) chatting to a woman who was being extremely flippant and nonchalant about her abortion. I think she brought it up, and her hard heart towards the murderous assault on her baby in the womb had to be addressed with tough love. I shooed off the guy who was trying to drag her away (often a specialty technique of satan), because she did want to talk. Eventually she walked away, but came back. She informed Charles her aborted baby was eight weeks old, so he/she wasn’t even developed or a human for that matter. Charles brought up an ultrasound picture on his phone of a baby that age to show her she was indeed wrong. That’s what struck a chord with her and she walked away. He didn’t do that to be mean or a bully, or to be “judgemental”. She needed to be sobered by the truth of what she had done. It’s a soft, humbled heart that will seek the Lord for his forgiveness and mercy.

Interesting thing is the guy on the right initially came up to listen to Steve’s preaching and was very unhappy. Eventually I addressed him, and he indeed had characterized us as Pelagians, reading the tract I gave him and saying it just talked about sin. Charles came over at some point during that, and the more I tried to explain the gospel to that guy, the more agitated he got. At one point he blew up in anger, and hopefully seeing that we didn’t react likewise witnessed to him. After a few minutes he calmed down, and sought our forgiveness with tears in his eyes.

I left him and Charles to talk, as it seemed he had a few personal burdens he needed to talk about. Amazing how someone can go from absolute rage to humility, and then want to chat about their struggles. Once you start sharing the gospel and talking to people, you realize there are a lot of hurting people inside and outside the church. He was able to witness that whole conversation Charles had with the girl, and after she walked off, Charles explained what had went on and the dynamic of lovingly offending people into the kingdom.

Oh and I almost forgot, right at the start of the night we were actually on the other side of the road. As soon as the pizza peeps saw us, they blasted their speaker. Lo and behold a few minutes after that an officer came up saying someone (wouldn’t tell us who, but I can have an educated guess) had made a complaint. At that point we hadn’t even preached yet, it was just our “presence” there, and we were asked to move. Again, give and take, so we ended up moving across the street for another fruitful night.

I’ll leave you with this. The officer mentioned that what we were doing was unique, because in 14, yes 14 YEARS, he had never encountered this scenario on the streets. One that is sad. But two, it shows, and we have seen it, that there is massive, ripe fruit just waiting to be picked, and we need to mine that area with the gospel like no other. 🐘